You are here: Home / Blog / Ethical dilemmas in the paralegal field – and life! 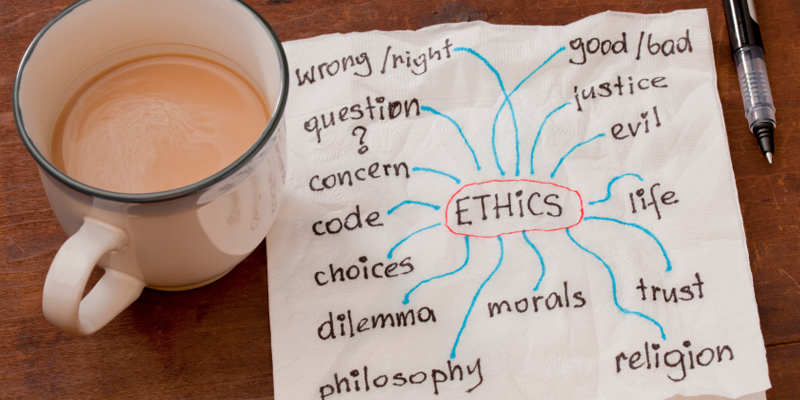 Ethical dilemmas in the paralegal field – and life!

Ethics is one of the most important, if not the most important aspect of being a paralegal. It’s a topic that must be discussed and one I hate to discuss because, quite frankly, it can get ugly. The world may tell you that if you do the right thing and you’re ethical you have nothing to worry about. That’s not true. Sure, it can happen: You can be an ethical person working for an ethical professional and go through life believing that it’s that way for everyone. Unfortunately, it’s not, so I decided to write this blog without pulling any punches. Here’s the reality. There are unethical people in this world and employers and those who work for them are no less immune to being unethical (or downright illegal) than anyone else.

As a paralegal, your ethical behavior needs to start long before you take a job. In many states, you cannot be a paralegal if you have a felony conviction; in addition, most corporations and law firms will not hire a paralegal with felony convictions because that person’s background also reflects on them. Quite frankly, that also goes for multiple misdemeanors and sometimes even aspects of your credit rating.

Credit rating? Yes. Many companies see a poor credit rating and unpaid bills as a sign of instability. Moreover, there are some law firms that handle banks and debt collection that will not touch someone with debt and liens because it can become a conflict of interest.

If you end up working for a government agency or applying for a paralegal position in a public defender’s office or the office of a city or county attorney, expect to go through background checks. If evidence of unethical behavior is found in your background, you won’t get the job.

Yes, people understand that family medical bills or some other hardship may have affected your current status. But, be prepared for the reality that tickets, convictions and bad credit can all lead to a poor or perception of your background.

That being said, what do you do about ethics once you have the job? After all, we’ve all heard the jokes: “Why don’t sharks eat lawyers?” Answer: “Professional courtesy.”

I majored in criminal justice, a program that was geared toward training peace officers, though there were a few of us with other goals or pursuing non-sworn positions. Still, I did take Patrol Procedures, and civil liberties and ethics were covered heavily in the course. My professor, a retired peace officer, broached the subject of ethics in the same way I’m speaking to you now:

“When it comes down to it,” she said, “You have to decide what kind of cop you want to be.”

I say to you now, “You have to decide what kind of paralegal you want to be.”

To understand what is considered ethical in the legal world, you first need to understand how legal professionals are regulated. However, the primary regulations apply to lawyers, not paralegals. Sound a bit vague? It can be.

Lawyers are regulated through the judicial system and in many states membership in the state bar is mandatory to practice law. The American Bar Association (ABA) is a voluntary association, and it adopted the Model Rules of Professional Conduct to help maintain the standards of lawyers. It is indirectly, through these rules of professional conduct, that paralegals and legal assistants can obtain guidance regarding the parameters of their jobs.

Section (a) is fairly straightforward. Although paralegal is not defined, a paralegal is the nonlawyer to which this rule refers. Section (a) simply states that the lawyer needs to “make reasonable efforts to ensure the person’s conduct is compatible with the professional obligations of the lawyer.”

Section (b) basically says that the lawyer is the supervisor and has responsibility for the nonlawyer’s conduct.

So, is the lawyer is the one with the ultimate responsibility? Yes and no. Although the ABA or judiciary may end up disciplining the attorney, when it comes right down to it, whether you are unethical or do something illegal, the consequences can definitely end up on your shoulders. If you behave unethically, you face the possibility of being fired; and, if you’re a member of a paralegal association, you can lose your membership. The attorney you work for can face sanctions or even disbarment. You can lose a client for an attorney. The client can be injured by your actions and sue both the attorney and you, as the paralegal.

Take that one step further and say you’ve done something illegal. You can be charged and put in jail or prison. In other words, you have extremely good reasons for conducting yourself in an ethical manner and obeying the law.

When a Lawyer is Dishonest

Now for a subject on which many fear to tread. What if an attorney tells you to do something unethical or even illegal? After all, the Rules of Professional Conduct say that he’s the one responsible. But will the attorney truly be held accountable? Here’s where you’re going to have to make some serious life choices. Let’s face it: Not all people are honest. Not all employers are honest. Not all lawyers are honest. You have to decide what kind of paralegal you want to be and it’s best to decide that early on. And, quite frankly, this will hold true in any occupation you choose. Law, construction, teaching, business, politics … you name it.

What makes it so hard when an employer tells you to do something unethical or dishonest? That’s easy:

If you go along with the unethical behavior and the actions become known, you may be the only one left holding the bag. If, on the other hand, you decide you don’t want to be unethical or do something illegal, you may need to find another job. If this is what you decide to do, you need to do everything you can to make the job change go as smoothly as possible, because an angry employer can do serious damage to your career regardless of whether you were right or wrong. They may not only fail to give you a good recommendation for another job, but they can give bad recommendations. Even though it doesn’t seem fair, it’s reality.

A glimpse at comments in some paralegal blogs will tell you many paralegals are happy and others are constantly walking a legal ethical tightrope. As a paralegal, the judicial system, attorneys, the public and the law expect you to be ethical. But, in the end it comes down to what you expect of yourself. You need to ask yourself some serious questions when you are faced with ethical decisions.

The easy one is, “Is it legal?” That one’s pretty cut and dried. If it’s illegal don’t do it.

But many things don’t seem so black and white. You will be dealing with client confidentiality, disclosure laws and legal technicalities, and as you approach each legal dilemma you need to ask yourself if it’s right or not. Does it violate anything in the lawyer’s code of conduct? That is as good a guideline for you as a paralegal as it is for attorneys. A good source of help may end up being your paralegal association. If you become part of a paralegal network, you will find others who experience the same dilemmas and may be able to help you navigate the more treacherous waterways.

Attorney Michael Josephson has made ethics a lifelong pursuit. He had three daughters and one day he looked at them and wondered what kind of world he was bringing them up in. He decided that ethics is something that cannot only be learned, but something that should be cultivated in business, in school, in law enforcement and all walks of life. To this end he started the Josephson Institute, which includes centers for ethics for youth, sports, business, public service and policing. To Michael Josephson, “character counts.” Over the years I have found the Josephson Institute a resource for ethical evaluation and much-needed inspiration.

As you are learning to become a paralegal, you are also beginning to or continuing to define yourself as an individual. It comes down to what kind of person and what kind of paralegal you want to be. You need to seriously ask those questions and decide on the answers. Hopefully, in the end, you will decide that character counts.