You are here: Home / Blog / 26 Legal Terms Every Paralegal Needs to Know 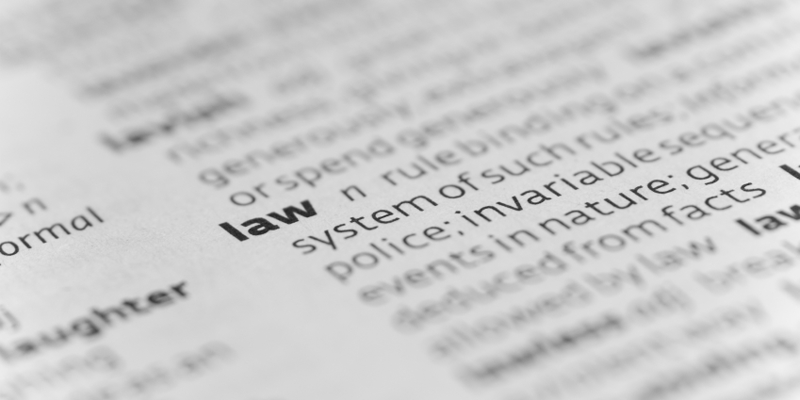 You’ve probably heard the metaphor, “It’s all Greek to me,” when someone doesn’t understand or is totally flummoxed by a subject or situation. The law is “Greek” to many people: it’s frequently misunderstood and legal terminology is misused by most people.

Featured Programs:
Sponsored School
*Whether you’re looking to earn an undergraduate degree in preparation for the Certified Paralegal Exam, or ready to advance your career with a master's degree in legal studies, accredited online programs make it easier than ever to get the education you need:

Take, for instance, the person who comes home to find that their home has been broken into while they were away and their television, stereo and other belongings have been taken. They phone the police and proclaim, “I’ve been robbed!” In fact, since they were not home and the belongings were not taken from their person or the immediate vicinity of their person, they were not robbed; rather, their home was burglarized. The confusion is understandable, since people watch a lot of television and actors often dramatically moan, “I’ve been robbed!” Sometimes they are correct, but more often the term is used in error. This is easily explained since most screenwriters haven’t gone to law school. One simplified distinction is that robbery is a person-on-person crime. Burglary is a property crime.

Other frequently confused terms are assault and battery. A man who has just been punched by another man may scream that he’s been assaulted. In fact, the presence of actual physical contact means that he’s been battered. If you have trouble remembering that you can think of it like this: If you are physically hit by a baseball bat, you have been battered.

In addition, certain terms can mean a number of things, depending upon the context. Take “lynch” for example. According to California Penal Code 405a, a lynching is “the taking by means of a riot of any person from the lawful custody of any peace officer.” However, the word “lynch” can also refer to killing someone without legal authority, usually by hanging; and, “lynch law” refers to punishment of presumed crimes or offenses, usually by death, without due process of law. As you can see, the way a term is used often dictates what it means; so, when you’re going through these terms, keep in mind that there can be variations in legal definitions.

As a paralegal you will need to become familiar with legal terms and especially familiar with terms used in the field of law you end up working in. Should you work for a public defender, prosecutor or criminal defense attorney you will be dealing with more terms relating to criminal law. If you work with corporations you will need to concentrate on corporate law, contractual terms and the Uniform Commercial Code (UCC). This same principle holds true for working with tax attorneys, family law or estate law. Understanding legal terminology is vital for understanding the law itself and properly applying it in research, legal analysis, document preparation and compliance with local, state and federal judicial systems.

Here are a few terms to get you started:

adjective law (or procedural law): That area of the law that deals with procedural rules of evidence, pleadings and practice.

administrative law: The area of law that concerns government agencies.

cause of action: The reason for which a plaintiff files a complaint or suit against someone. This can be negligence, breach of contract, malpractice or defamation, to name a few. A cause of action is divided into elements, and each element must be proved to win the case.

civil law: 1) A generic term for all non-criminal law, usually as it applies to settling disputes between private citizens or entities. 2) A body of laws and legal concepts derived from Roman law instead of English common law. (English common law is the basis of state legal systems in the U.S., with the exception of Louisiana.)

compensatory damages: Damages that are recovered for injury or economic loss. For instance, if someone is injured in a car accident and the party who injures them has to pay compensatory damages, the party at fault must cover cost of things such as the ambulance, doctors’ bills, hospital stays, medicine, physical therapy and lost wages.

constitutional law: Law prescribed by the written federal and state constitutions, as well as the interpretation and implementation of this law.

contract: An agreement between two or more parties to do or refrain from doing something; this often involves a promise of something in return for something of value. There are both written and oral contracts, though in some states oral contracts have little or no standing.

demurrer (dee-muhr-ur): A formal response to a complaint filed in a lawsuit, pleading for dismissal and saying, in effect, that even if the facts are true, there is no legal basis for a lawsuit. Examples include a missing necessary element of fact, or a complaint that is unclear. The judge can agree and “leave to amend,” giving the claimant the opportunity to amend the complaint. If it is not amended to the judge’s satisfaction, the demurrer is granted. (Some states use a motion to dismiss.)

depose: To testify or give under oath or sworn affidavit.

diligence: Reasonable care or attention to a matter; for instance, looking both ways before proceeding after stopping at a stop sign, washing your hands before cooking food in a restaurant or operating in a hospital or checking brakes and other mechanical components on tour buses at regular intervals. Due diligence denotes what a normal, responsible person would do under the same conditions.

felony: A serious crime punishable by death or at least one year in a state or federal prison. Felonies include arson, rape, perjury and homicide. When theft is involved, the value of that which was stolen determines whether the offense is considered a misdemeanor or felony.

laws: A system of regulations governing the conduct of a community, state, society or nation in order to provide consistent order and justice. In the United States, laws can be statutes, ordinances or regulations, and are usually enacted by the legislative branch at a state or federal level, or by a branch of the government with authorization from a law already established.

mens rea (menz ray-ah) Latin for a “guilty mind”; mens rea is used to describe a culpable state of mind, the criminal intent of the individual when committing an criminal act. For some crimes, this intent must have been present for a person to be guilty of the crime.

misdemeanor: A crime less serious than a felony, punishable by or imprisonment for less than a year.

prima facie (pry-mah fay-shah): Latin for “at first look,” or “on its face,” prima facie refers to what can be presumed after the first disclosure.

prima facie case: A case where, upon first look, the facts themselves prove the case.

provisional remedy: A temporary court order to protect someone from further or irreparable damage while further legal action is pending. For example, a temporary restraining order is a provisional remedy to help keep someone safe until a hearing to decide if a permanent restraining order is needed; likewise, a temporary injunction to stop the destruction of a building can keep it from being destroyed while the court decides whether it is a landmark.

punitive damages: Damages awarded over and above compensatory damages for punishment. If the act causing the injury was committed out of negligence or malice, punitive damages serve not only as a punishment, but as an example or deterrent to others. It also helps put the injured party on a level playing field. For instance, an individual who loses a leg when hit by a drunk driver cannot be awarded a new leg, but a monetary award can help that person face the resultant obstacles.

stare decisis: Latin for “to stand by things decided,” to adhere to precedents of earlier cases as sources of law. When an issue has already been ruled upon by a court, other cases involving the same issue must receive the same response from that court or lower courts.

statute: A written law passed by Congress or another legislative body.

title: The legal basis ownership of real or personal property or a document that serves as serves as evidence of this ownership. Deeds for real estate, and titles for cars and boats are examples of titles.

title abstract: A history of ownership that establishes the present state of a title.

title search: An examination of public records to determine the state of a title and confirm that the seller of a property is its legal owner. A cloud on the title such as a lien, an unrecorded owner or differing property descriptions on previous deeds can be a reason to cancel a purchase on a property.

tort: From the French word for “wrong,” a tort is a wrongful or illegal act, whether intentional or accidental, in which an injury occurs to another. An intentional tort may also be a crime, such as battery, fraud or theft. Tort law is one of the largest areas of civil law.

wobbler: Sometimes referred to as a “felony wobbler,” a wobbler is a crime that can be classified as either a felony or a misdemeanor. In some states, even if an offender is charged with a felony in a wobbler case, the judge may have the authority to reduce the conviction to a misdemeanor.